You are here: Home / About
Our Show

Technology is a wonderful thing when it comes to performing live on stage these days.  So much has changed in the past few years which has enabled us to do so much more with less.  The equipment has gotten smaller, lighter, and more powerful than ever before.  We have tried to keep up with the changes along the way and are constantly testing and following the latest trends in the music world.

Automation is key for us as a duo and we are finding better ways to implement this into our show all the time.  Gone are the days of needing a sound and lighting technician as the advances in this equipment has evolved to a point where we can achieve and control all this as we perform by ourselves.

Consequently, this new gear is seldom ready to use right out of the box.  Many tedious hours, days, and weeks are sometimes required to integrate a promising new gizmo to work with all our other gizmos. The winter months are usually the best time for us to experiment with our setup as South Dakota weather keeps us close the warm fire.

Our main plan last fall was to revamp everything into a lighter and more compact setup which would allow us to accommodate areas of any size, large or small, indoors or outside, without sacrificing a quality performance.  Reducing setup and tear down time was also a huge factor in our goals as we respect most events are on a stringent timeline, and understand everyone wants to get home at a decent hour.

We worked closely with manufactures and distributors to engineer our current setup to escalate us to a point where many of our fans have stated it’s the best we have ever looked and sounded!

This year we are excited about introducing many of our new features to our deserving audiences.

The year of 1998 was a magical time for us as we got married and started to explore our love of music. What wedding wouldn’t be complete without the bride and groom performing! Combining our experience from a wide variety of performing and technical expertise proved to be very beneficial in re-creating some of the best songs ever.

Rod had been the lead singer and keyboard player for the rock group, Silver Heart Band, in the seventies and eighties which disbanded due to the disco era and the loss of many of the old Midwest ballrooms such as the Showboat and others. { If you have any memorabilia from those days please let us know.}

Rod continued to perform solo on acoustic guitar for several years after and also recorded radio and TV jingles.

Tanya has been trained in the world of classical piano, jazz saxophone, and guitar since early childhood. Her grandmother even taught her the harmonica! Her playing and singing talent is breath taking to say the least. She also had a few years of solo performances singing popular music with her piano skills. It wasn’t long after we got together that we started playing some duo gigs. Things like art festivals, corporate events and even a live radio show.

It is true that “it runs in the family” as Tanya’s 2 children, Tyler and Tracy also begin to show their musical abilities. Tracy even gave a solo performance at our wedding! Tyler later revealed his skills with his interest in drums which he mastered very quickly and thus we had a four piece band.   We played together as a family and called ourselves KonnectedKin whenever our schedules would allow.

Ultimately children grow up and leave home to pursue careers, dreams and families of their own which left us to start again as only a duo. In our spare time we began building our equipment and set lists to entertain most anyone, anywhere, indoors or out. We look forward to returning to many of the places we have played in the past and are looking forward to several new venues as well. We hope to see you soon and enjoy the fun!

A few years ago we had dream to sell everything, buy an RV and travel the United States. We want to see everything our great Nation has to offer and play our music every opportunity we get. Stay tuned, as we turn our dream into a reality very SOON!!!!

Reality has arrived. We hit the road on November 5th, 2015. We’ve been able to downsize the gear and pack it all into our motorhome. Our first concert in the desert, what a magical night!!! 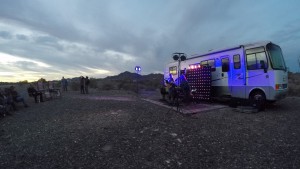