We Can See – Fogged Glass Repaired

This is how our passenger side window looked in May of 2015 when we first purchased this unit.

We knew it was something we would have to eventually address but set it on the back burner and let it simmer for a while.  Wishing it could somehow go away on its own or at least get better in time was mere procrastination at its best.

You could “kind of” see out of it 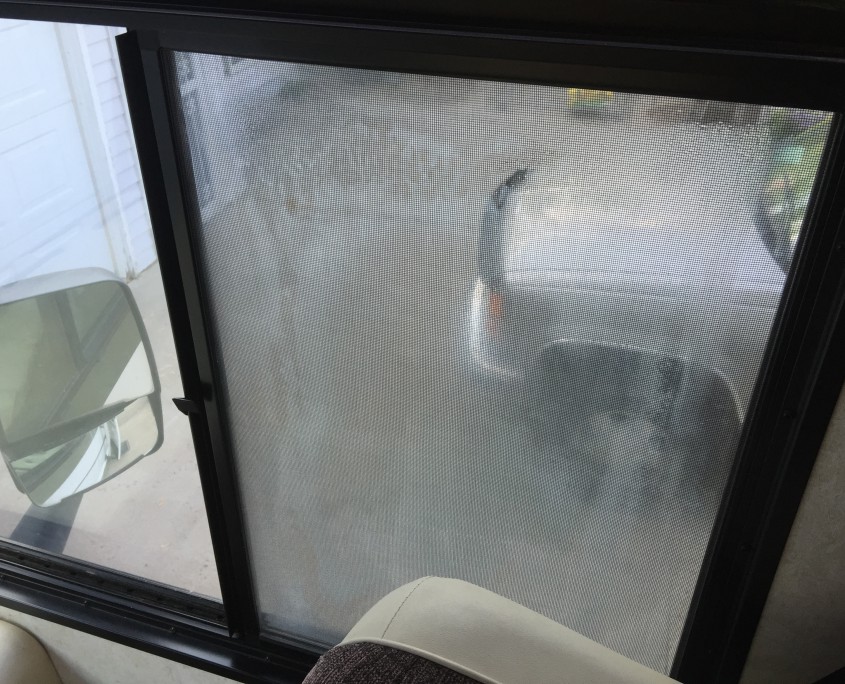 This is how it looked in August of 2015 just 3 months later.  After making a few test road trips we realized what a danger this window had become.  In order to get a clear line of sight to oncoming traffic Tanya would have to undo her seatbelt and move forward to check the traffic as my driving position was completely blocked at this point.

We talked with our local automotive window guy who quickly admitted he never had worked on such a thing like this.  Several other auto glass places in the Midwest would only suggest we contact the manufacture and get new windows. 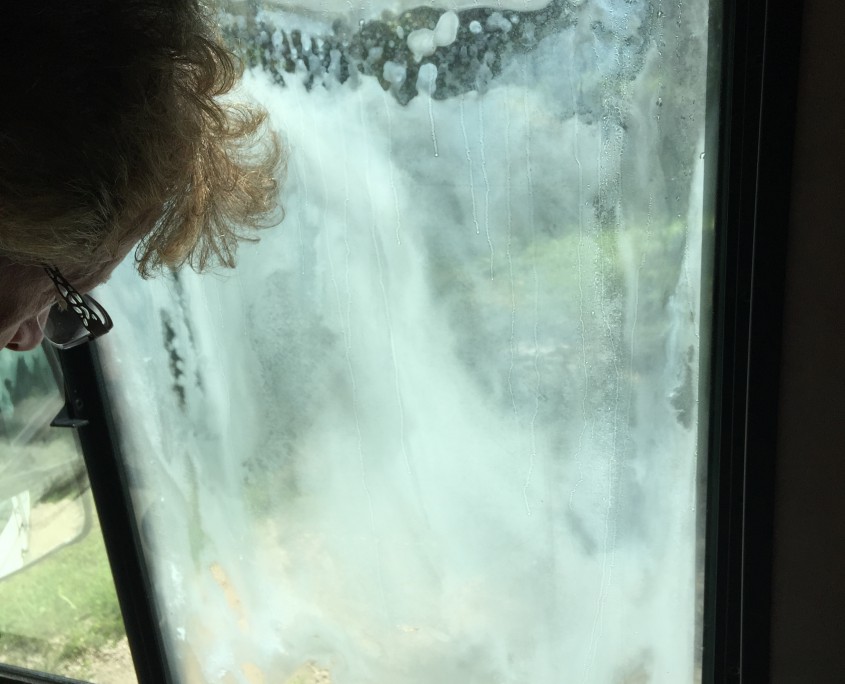 One sunny afternoon our thoughts were maybe we would tackle this ourselves.  The process of removing some screws here and there to get the glass out seemed easy enough so we started the disassembly.  Once the trim was off we able to slide and lift the foggy window almost to the removal point, however, there seemed to be a bit of a hump in the middle preventing it from coming out.  It was apparent to us the whole framework needed to come out.  Some head scratching debates now convinced us to put everything back together and seek out some professional hands to do this project.

That’s a no-go on this DIY project 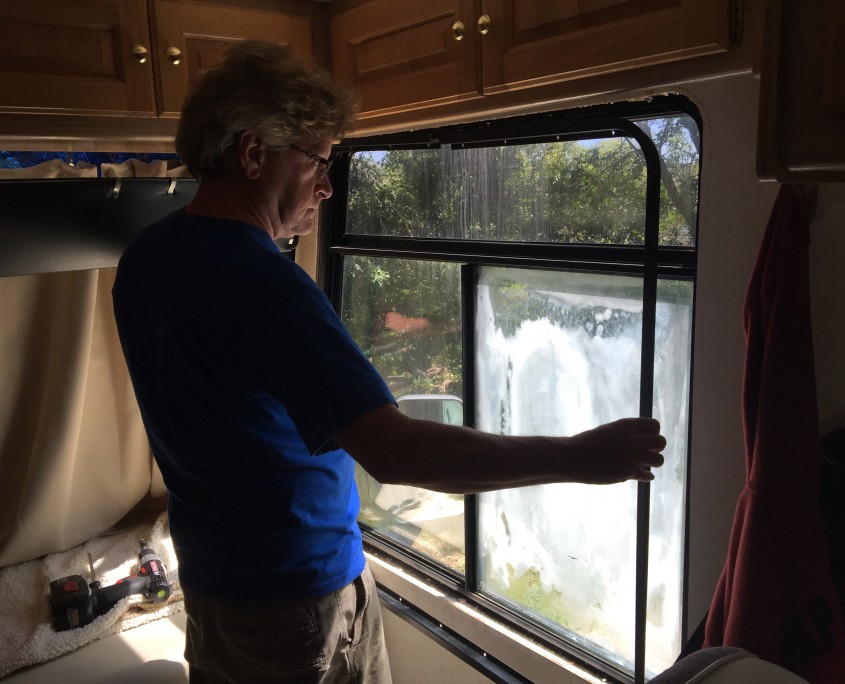 We knew Arizona was on our list for a prolonged 30 day stop so we decided to get it fixed once we got there. A quick internet search of the area gave us new hope and we setup an appointment to get our rock chip and fogged windows taken care of.  This company would also come directly to our resort and do the work onsite which was a huge bonus.  Two guys showed up and quickly removed the side window frame and placed the foggy window in the junk pile.  They cut new glass and installed some sealant strip in between the 2 sheets of glass.  Things appeared to be going so well we decided to have the one on the driver’s side fixed too as it was showing signs of moisture which was blocking the mirror.  Everything was progressing according to plan until the very end when trying to install the window slide bar on the new glass a very distinct “clink” sound filled the air.  Yes, it happened, the new glass was now cracked.  Murphy’s Law was in full force today!  The day was fast slipping away and more time would be needed to get this finished. We accepted their apologies and another appointment was made to complete the job.

Things were going good for a while… 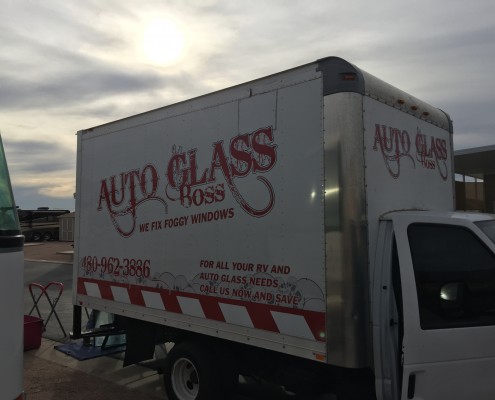 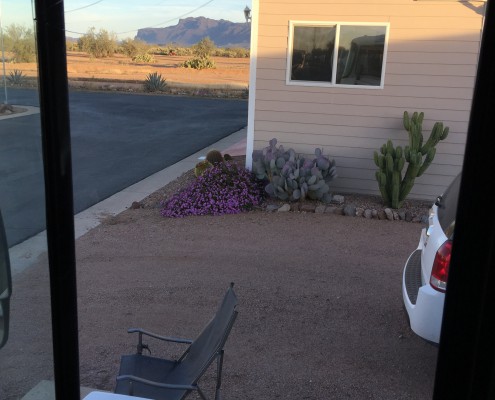 Close inspection showed us the original glass had a greenish tint which was easy to see compared to the new glass as it was clear.   A phone call to their office to get the tinted glass on the next attempt was all it took.  Apparently we needed to specify this at the beginning.  The weather turned cloudy and a few days of rain caused some delays which turned out to be a blessing as they needed to order in some green tinted glass.  Maybe this is why we didn’t get it on the first install.  A week had passed waiting for the new glass and better weather but we were called every day to reschedule.  At last the day arrives when their truck showed up and the work began.  This time we were introduced to 2 different guys.  Wes and Jessie had been assigned to the task at hand.  Wes instantly discovered the reason for the broken glass and said he was embarrassed to admit the previous install was incorrect.  The sealant used between the glass panes was 3/8” and it should have been 5/16” so when the slider bar was being pushed in place over the 2 pieces a “clink” sound was inevitable.   Wes further explained the window would have had a hard time sliding with the thicker spacing so it was a good thing it broke.  He also showed us Holiday Rambler only used one tinted pane to achieve the right amount of tint.  While Wes continued on the passenger side, Jessie was fast removing the driver window frame.   The driver side window panes were separated and razor blade scrapping with some glass cleaner made them look new again.   Here it is, take a look, wow, okay, we were pleased, have you got a bill for us? The rock chip was 40.00.  The window labor is 90.00 each.  The glass panes with cutting are 90.00 each.  We were happy to see this project completed and satisfied with the end result.  We can now drive safely again.

The entire frame must come out 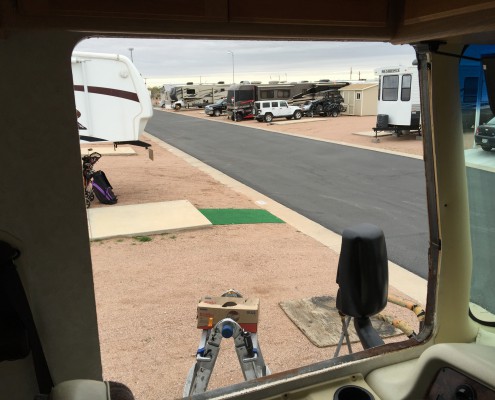 Rod is keeping a close eye on those two! 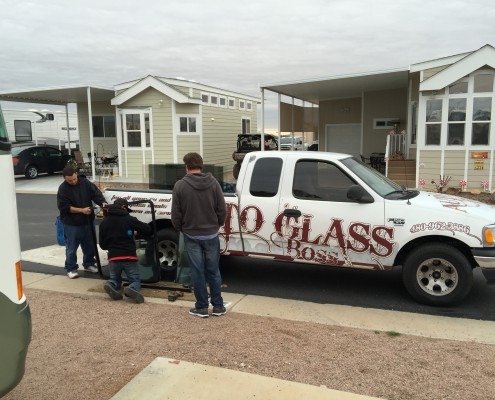 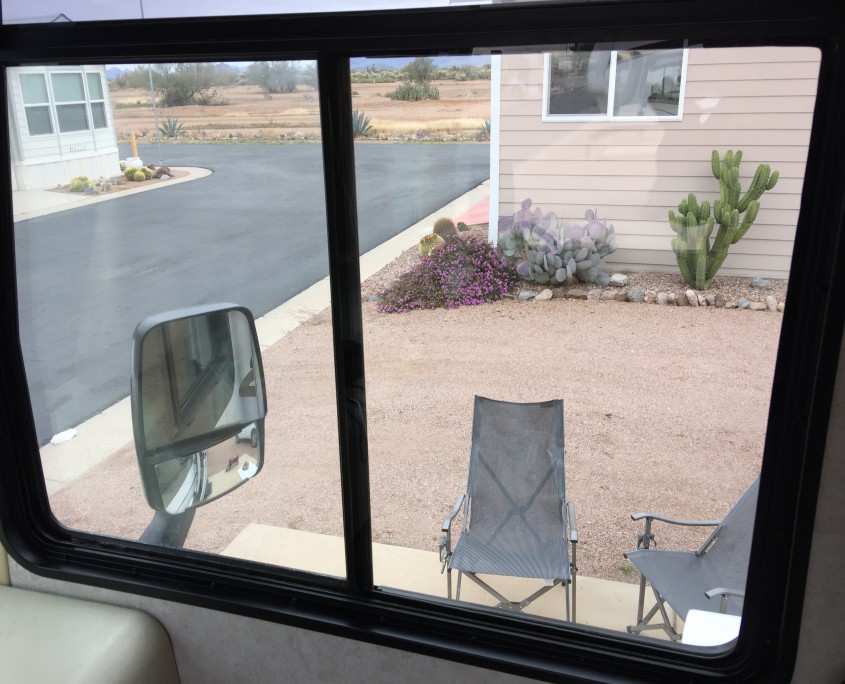 If you are in the area and need some glass work done, we recommend you contact them.  Ask for Wes and Jessie!

Out and About the Gold Canyon Area

The Apache Trail
Scroll to top